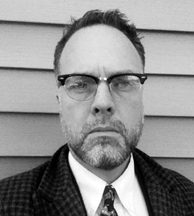 Childish Gambino: Donald Glover Does It All | Paste, November 15, 2011

A Leopard Among the Bannas | Christian History, Issue 79, Summer 2003

The Rules Have Stayed the Same | Books and Culture, Jan/Feb 2000

"An Invitation" | Books and Culture, December 2011

A Regimen of Aimless Strolling: Billy Collins' Horoscopes for the Dead | Comment, February 20, 2012

No Uncertain Terms: Three poetry collections show us who we are. | Books and Culture Web Edition, January, 2012

The Jerk: A review of Robert Crawford's The Bard | Books and Culture, January/February 2010

Six-Pack: The charms and annoyances of "collected poems." | Books and Culture, July/August 2008

Soft Launch (Persea, 2019)
Available in local bookstores or through Amazon.

"I would love to quote you a few lines from Aaron Belz's Soft Launch—how he rhymes 'Greenland' with 'what could have beenland,' for example, or rushes to the defense of Scott Fitzgerald—but that would give away the whole thing: the punchlines, the puns, the wry twists, the lemon twists, the twists of fate, and the fate of the known universe. It's all here, as a delicious set of inside jokes, like a Starbucks among the stars or a brat inside a bratwurst. The play within this play is what makes it playful. But also full. And delicious. Like a cup of tea that might scald you if you drink it too fast. Take little sips. Don't burn your lips. This poetry is hot, I'm warning you."

"Aaron Belz is the Comic of the Apocalypse. Were you expecting a Horseman? Get ready to be repeatedly disabused."

"In the comic fourth book from Belz ... the poet acutely observes his fellow humans—especially millennials—and uses these observations to weave text-speak and startup jargon into rich moments that feel entirely human." 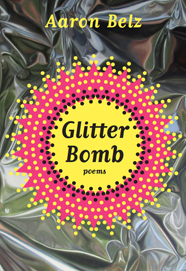 Glitter Bomb (Persea, 2014)
Available in local bookstores or through Amazon.

"These poems pull no punches: irreverent, devastating, even nasty at times, they capture the present moment in all its absurdity and hyperreality. 'Lampwise by altarlight' (pace Dylan Thomas), Aaron Belz keeps his eye on the object: often hilarious, he is also wise: here is a charming little poem called 'Team,' telling us, with its tongue firmly in its cheek, that we do need others: 'There's no I in team, / but there's one in bitterness / and one in failure.' Glitter Bomb is full of such pleasures."

"To say he isn't 'merely' a comic poet implies that there's something wrong with being a comic poet. I don't believe that, and Belz is one of the best comic poets we have."

"Belz undoes the notion that humor must come second to big ideas... These joke-poem hybrids challenge form by suggesting that the comedy is the poem, not just serving it. Even the more recognizably poetic pieces refuse to be taken too seriously." Ridker, Boston Review

Lovely, Raspberry (Persea, 2010)
Available in local bookstores or through Amazon.

"Aaron Belz's poetry reminds us that poetry should be bright, friendly, surprising, and totally committed to everything but itself. Reading him is like dreaming of a summer vacation and then taking it."

"Aaron Belz writes in the tradition of Richard Brautigan, never afraid to let the awkward intensity of address and visual snap of juxtapostion hijack the poem's more solemn duties. Reading Belz is like watching an intimate comic performance; it's stand-up poetry meant for you alone." 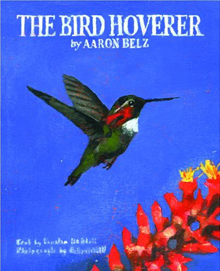 The Bird Hoverer (BlazeVOX, 2007). Available through SPD or Amazon.

"Aaron Belz is a gravely hilarious poet. The poems from The Bird Hoverer are part Discovery Channel, part History Channel, part E!—his ferocious intelligence, his love of glitz, and his wry take on relationships (both human and animal) are irresistible. Belz's voice is bold, wise, inimitable." —Denise Duhamel 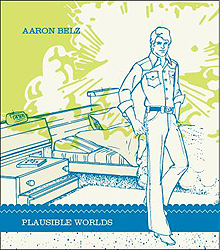 "Aaron Belz offers us a poetry of exhilaration and exuberance where the self is drowned in a flood of pop cultural referents fading as quickly as a television commercial or a movie trailer." Luong